It seems that many contributions as of late have been with regards to equipment. So I thought I’d share a mini adventure. But ironically, this outing was all because of the equipment. Let me start with a little back story.

I’ve been an avid photographer for over 20 years. I prefer going out solo when shooting, because I don’t want to feel as if I’m holding someone else back. Furthermore, I want to be able to take my time, experiment, take photographic risks, explore side roads and unfamiliar territory, get up ridiculously early for sunrise, and stay out well after sunset. I don’t know many people who would put up with this type of adventure. Besides, I can get rather selfish when it comes to taking a photograph.

For the last 15 years, these excursions have been done with a 2001 Ford F150, 2wd. This truck has served me well, but it always held me back in some situations because of the lower clearance, stock suspension, and 2wd. I constantly found myself in situations where I had to turn around for fear of getting stuck while on my own. In turn, I’d get frustrated, because I missed many photographic opportunities. So every time this would happen, I’d tell myself I needed to get a 4×4, and I’ve been saying this for years! One such event happened two years ago.

I was on a solo trip through the Eastern Sierra Mountains and Death Valley. After five days, I drove to Las Vegas to visit my father and afterwards, I navigated Interstate 15 back home to Los Angeles. Whenever I’m out and about, I’m always looking for something to photograph. I don’t like to limit myself to just one subject. So on the last day of my trip, at the end of November, something caught my eye. The weather was stunning with a sparkly light that reached through the clouds and touched the land below. This kind of drama lent itself to photographing anything well. With my gaze diverted, I scattered the landscape more-so than the road. Then, like a fish, I was hooked and yanked into the desert. The bait that lured me so was a dilapidated billboard off the highway North of Barstow, a giant worm to feed my addiction. This wasn’t any old billboard, but a giant billboard two or three times as big as those you normally see around town. Furthermore, this was delightfully weathered with missing panels, faded paint, and indiscernible words. It looked like it could barely stand on its own legs. I simply had to photograph it!

This moment of seduction happened in seconds as I flew down the road with hundreds of other vehicles. Despite the fact that I was heading home, my mission was clear. I became fixated on getting the shot. Nothing else mattered. All time stopped. My addiction had complete control. YES! There was an exit off the highway only a couple miles down the road. I raced up the offramp, dashed over the traffic below, and bailed left onto a dirt road that paralleled the interstate. This route appeared straight-forward, lacking any technical challenge, just a bit sandy and washboard at times. After all, I was in a flat desert. However, after a mile or so, I came to a precipice that dove down into a sandy wash. Gutted and precarious, I questioned whether my two-wheel drive truck would be able to navigate the terrain, especially the rugged hill ascending the other side. I exited the vehicle and contemplated the situation while locked on the prize. Like a childhood bully, the billboard taunted me. It was literally mocking me, because he knew I was weak and wouldn’t risk the challenge that lay between us. He was right. I tucked my tail, bowed my head, and retreated in defeat. But I vowed to come back.

Presently, I’m driving a 2015 Toyota Tacoma 4×4 that I purchased last December. I’ve outfitted it with many upgrades thus far, and I’m having a great time building it. Although some may question my choices and the expense, I’m grabbing life by it’s horns and rolling with it. I truly believe that I have one life to live so I better do it now or never. Anyway, I bought this truck specifically for the purpose of gaining photographic opportunity.

A couple weeks ago, I faced off with my desert opponent while on a short weekend trip to Las Vegas to visit with my father. As I reached past Barstow, my adversary came into sight. This time, however, high noon light wasn’t so kind on the old soul. His haggard bones, cut deep with shadows, made him less magnificent than we was two years earlier. Of course, my perspective was different on this venture. With my new Tacoma, I skated over the ruts and sand thrown at me by the desert landscape and swaggered up to meet my threat. Despite the lack of magical light, I accepted the challenge and snapped my camera at him. He mercilessly gave in. 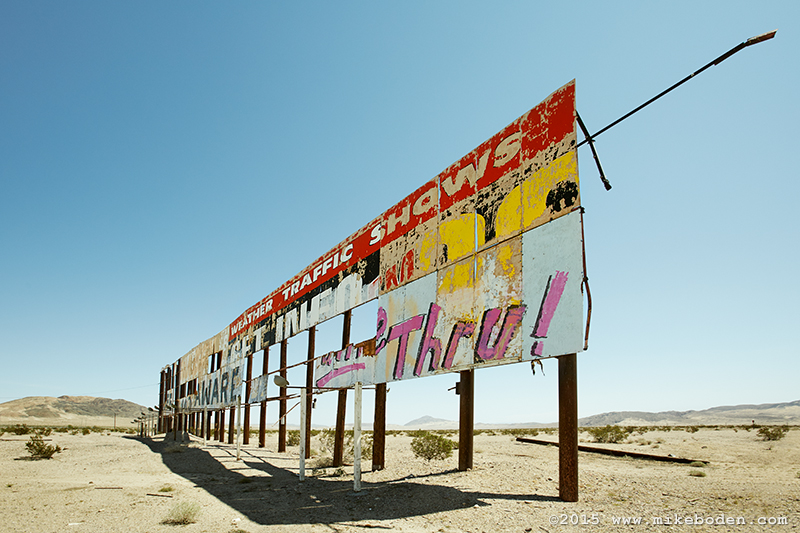 Even with lackluster lighting resulting in a meager image, I felt victorious. My reasons for getting a four-wheel drive vehicle were justified, because I was no longer limited by my equipment. I had the right tool for the job. The only thing holding be back was timing. I just had to be in the right spot at the right time, which goes beyond skill. To make a great image takes great light, and that’s something I cannot control.

On the return trip, luck lent a gentle hand, but only slightly. Afternoon light offered a more pleasing lower angle with face-lighting, and abundant clouds decorated the sky.

Two years earlier, my mind’s eye saw the billboard as a panoramic. However, I particularly wanted to create the image with a Fuji GX617 panoramic camera, which I neglected to bring on this trip. Upon departure, I quickly grabbed my Canon 5D-mkiii, a few lenses, and a tripod, all the while thinking I wasn’t going to shoot anything. After all, this trip was nothing more than a quick visit with my father. So I simply brought the camera more out of habit than anything else. Therefore, while standing in the desert for the second attempt in one weekend, I thought I’d create a panoramic image with multiple frames. This particular photograph is actually made up of five vertical frames that I stitched together. In comparison, this image grabs me more than the other, although I’ll continue to face my foe in the future. Perhaps luck will be on my side and the lighting will be simply magnificent.